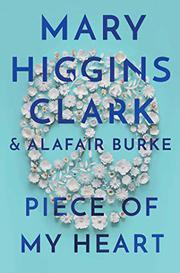 PIECE OF MY HEART

The sixth and presumably final collaboration between Clark, who died in January, and Burke picks up with true-crime TV producer Laurie Moran on the very eve of her wedding, only to see her happiness dashed when her fiance’s nephew is kidnapped.

Even though her first husband was murdered by a man who years later came after her and her son, Timmy, Laurie considers herself impossibly lucky. As she frolics at East Hampton’s South Shore Resort and Spa, surrounded by her loving family, days before she’s to marry federal judge Alex Buckley, who hosts her TV program, Under Suspicion, she feels more blessed than ever. Her serenity is rudely jolted when that family suddenly shrinks with the disappearance of Johnny Buckley, the 7-year-old son of Alex’s sister, Marcy, spirited out from under the nose of his longtime babysitter’s slightly less attentive friend. Laurie blames herself for golfing instead of hitting the beach with Timmy and Johnny; her father, former NYPD first deputy commissioner Leo Farley, blames himself for spending the day responding to the accusations of Darren Gunther, who’s been imprisoned ever since he confessed to Leo that he stabbed bar owner Lou Finney 18 years ago in a brawl that got out of hand, that Leo only made up his confession. Could Gunther have arranged Johnny’s kidnapping to press Leo to support his story? Could the abduction have something to do with Marcy and Andrew Buckley’s adoption of Johnny soon after he was born to a woman whose identity they’ve never learned? Or could the kidnapper have snatched Johnny by mistake, thinking he was Timmy?

A fitting sendoff that modulates as smooth as butter from celebration to shock to detection to ticking-clock suspense.