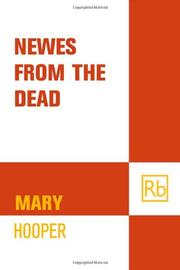 NEWES FROM THE DEAD

A hanged scullery maid rises from the dead in this fascinating historical novel based on actual events in Cromwellian England. Wrongly accused of infanticide after delivering the stillborn child of her wealthy employer’s ignoble grandson, Anne Green is sentenced to death. After being hanged, Anne awakens to a state of suspended animation, where she can neither see nor speak. She begins silently reviewing the sordid circumstances that led to her demise, while on the other side of the coffin’s lid, Oxford’s finest physicians discuss her imminent dissection. Luckily, a shy medical student observes her flickering eyelids and the doctors stay their knives. Anne is successfully revived, her near-death condition attributed to an ill-placed knot in the noose. Hooper takes what could have been a lurid tale of being buried alive and turns it into a suspenseful and thoughtful exploration of capital punishment, class bias, religious belief and medical ethics. Fans of Jennifer Donnelly’s A Northern Light (2003) or Julie Hearn’s The Minister’s Daughter (2005) will be eager to make Anne’s acquaintance. (Fiction. YA)