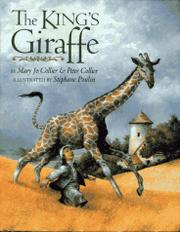 In 1826, searching for a suitable gift for the king of France, Egypt's pasha happily seizes on the suggestion of a stable boy, Abdul, that he send his giraffe. With Abdul as his affectionate keeper, the creature creates a national sensation as he makes his way from Marseilles to the king's chateau at Saint-Cloud: Towns rename streets, dressmakers and milliners create new fashions, poets write ``long, thin poems,'' and admiring crowds gather along the route. The awestruck king delights Abdul by inviting him to stay on as keeper of the whole Royal Menagerie. In rich colors, softened edges, and subdued light reminiscent of Uri Shulevitz's The Treasure (1979), Poulin's oil paintings- -ranging from half-pages to wordless full spreads—show an interpretation of this historic event that is suffused with tongue- in-cheek charm; the calm, dignified giraffe towers with an indulgent air over excited, gnomish human figures, and the artist suggests an appropriate imaginary monument in the final scene: a giraffe's head built atop the Eiffel Tower. Nancy Milton's The Giraffe That Walked To Paris (1992) commemorates the same incident; while she, too, employs invented dialogue, the Colliers's first collaboration is a somewhat longer, more elaborately illustrated account. (Picture book. 8-10)