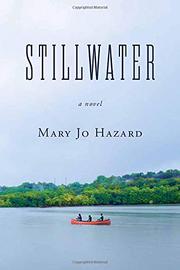 A tween girl and her friends confront small-town troubles in Hazard’s novel.

Despite its name, the town of Stillwater in upstate New York has some turbulent undercurrents. Twelve-year-old Grace Bryant and her friend Maggie Miller have a creepy encounter with their Catholic school’s janitor, who grabs one of them in a boiler room, and though some adults bizarrely blame the girls for what happened, the school’s priest has him fired. The girls, along with their other friend, Louanne Dodd, also have troubles at home. Grace’s father died when she was 8, and she misses him terribly. Both Maggie and her mother keep getting injuries that they blame on accidents, but the real cause may be Mr. Miller. Louanne’s parents are divorcing (“My dad doesn’t love me enough to stay,” Louanne tells Grace), and Grace is shocked to discover the true cause of her own father’s death. The town is plagued by arsons, and Louanne’s Uncle Tony—who’s either schizophrenic or suffering from brain damage—is a prime suspect despite a lack of direct evidence. Grace doesn’t believe he did it and devotes herself to finding who’s really at fault. In her first book for adults, Hazard deals sensitively with her adolescent characters as they gain maturity and negotiate the lies, secrets, and deep flaws of the adult world. The arson story is a compelling central point around which the rest of the story revolves, giving Grace and her friends the opportunity to practice observing and evaluating the people around them. Some plot points feel too pat, such as Mr. Miller’s quick redemption, and Tony is overly reminiscent of Boo Radley in To Kill a Mockingbird, but overall, the novel is thoughtful and captures Grace’s perspective well.

A coming-of-age story that deals honestly with sensitive topics.