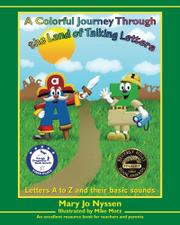 A COLORFUL JOURNEY THROUGH THE LAND OF TALKING LETTERS

This unique picture book features a talking, multicolored alphabet to teach basic sounds, from Andy and his apples to Zelda the zebra.

English has many quirks, but Nyssen’s sunny ABC book keeps things simple by addressing only single letters. Except for the co-dependent “qu,” other letter pairings—such as “ay” and “ea” and “ch”—have not been included. With characters such as Andy, April, Alma, Grandpa Goose and George the giraffe, the differences in the oft-changing pronunciation of some letters becomes obvious. For example, through “Yolanda the yellow yak,” “Lynn” and her “cymbals” and “Kyle’s pig sty,” Nyssen clearly explains the letter “y” and its mysterious ability to make three sounds and be both a consonant and a vowel. Beginning in simple, sporadic rhyme, Nyssen opts for an alliterative and more effective free verse for most of the book. The real strength is her novel color scheme for letters that shows, for example, the short “a” in green letters, the long “a” in red and its “third sound” in brown. The biggest problem, however, is the similarity of colors: the red signifying the long “a” in “angel” looks too much like the brown “a” in “all,” which may cause confusion. Similarly, Nyssen’s “cuddly calico cat, Cleo” has a pink “c” that resembles the orange used for the soft “Cynthia” enjoying “cereal, cinnamon and cider.” Additionally, one could argue that “x” has more than one sound than the “‘ks’ as in fox.” Nyssen also fails to mention the powerful role of some letters to remain silent and how some, like the split vowel “e,” can make the “a” in “lemonade” long and the “a” in “obstinate” a short “i.” Regardless, Motz’s inventive illustrations radiate charm and imagination, greatly helping to distinguish Nyssen’s book from other early reader alphabets.

An excellent study guide with clever illustrations to assist with the basics.