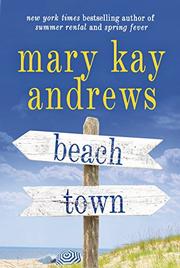 Bestseller Andrews introduces Greer Hennessy, a third-generation worker in the film industry, whose difficult background and current job trigger a flood of problems.

Greer’s personal life is a mess, and her professional one is no laughing matter, either. Following an incident involving a fire on her previous job, the location scout/manager is hoping to redeem herself working for Hollywood’s newest golden boy, director Bryce Levy. Although the script for his latest movie is vague and ever changing, Greer finds him the perfect location, a small dot on the map along Florida’s Gulf Coast fraught with heat, humidity, palmetto bugs, and little else. Economically stagnant Cypress Key has seen better days, and Greer assumes its citizens will jump at the opportunity to make some quick cash and spotlight their town. The area also features an old ramshackle building along the waterfront that’s perfect for the final scene—so long as Greer can secure permission to blow the erstwhile Cypress Key Casino to smithereens. Mayor Eb Thibadeaux (who apparently emulates Dr. Seuss’ Bartholomew Cubbins in the hat-wearing department: he’s also co-owner of a local motel, a realtor, grocery store and boat repair shop owner, and town engineer) is skeptical about the benefits of having a film crew invade the town, and he’s definitely against Greer’s plans for the historic structure. But he’s attracted to Greer, and she to him. A romance quickly develops, then ebbs and flows as a tidal wave of complications creates misunderstandings between the two—and there are plenty as Andrews floods the story with several secondary characters and subplots. The author uses her tried-and-true formula to good effect, though. As in many of her preceding novels (Save the Date, 2014, etc.), Andrews masterfully creates an entertaining story filled with likable characters and a few lightweight, havoc-wreaking troublemakers. Although far-fetched, it’s entirely fun.

A perfect fit for the romance lover’s beach bag.