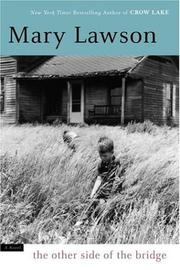 THE OTHER SIDE OF THE BRIDGE

Another note-perfect take on coming of age in northern Canada, as beautiful as the landscape is stark, from Lawson (Crow Lake, 2002).

Jake and Arthur are as dissimilar as brothers can be. Arthur, stolid and strong, takes after their farmer father, which is a great help as the Depression hits even their self-sufficient village of Struan. Quicksilver younger brother Jake is their mother’s favorite. She admires his good looks and wit, but is blind to his selfishness. The brothers are so different that the story’s crisis feels inevitable. Assigned to walk cows to a neighbor’s farm, Arthur patiently leads a nervous heifer over a rickety bridge, while Jake fools around on the bridge’s underside. When Jake calls out that the cow’s movements might make him fall, Arthur responds with one rare word, “Good,” that will haunt him throughout life. Cut to 20 years later, and Arthur is in charge of the family farm, still silent, still suffering, despite a healthy family and lovely wife. This second story focuses on young Ian, the son of Struan’s doctor, who obsesses over Arthur’s wife. As he wrestles with his own legacy, he becomes more involved with Arthur’s, bringing about an event that will lay bare several secrets. With all the elements of melodrama, Lawson instead crafts a deftly interwoven story of family and loss. Jake’s not evil, just bored. He, like Ian’s mother, isn’t valued in this hardscrabble climate, where his father and brother miss his school play due to errands. “Farming’s important. Work’s important. Time he knew what matters and what doesn’t.”

The calm and beauty of the setting pervade Lawson’s second novel, intensifying the heartfelt pull of its simple human drama.