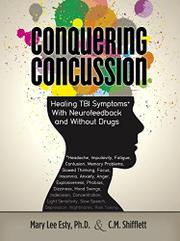 Healing TBI Symptoms With Neurofeedback and Without Drugs

Powerful advocacy for an emerging therapy.

Esty, a seasoned neurofeedback practitioner, and Shifflett (Migraine Brains and Bodies, 2011, etc.), a science and technology writer, argue that public ignorance and medical dogma plague the prevention, diagnosis and treatment of traumatic brain injuries (used synonymously with concussion). In this primer, aimed at both lay readers and professionals, they deliver a searing indictment of the status quo and an impassioned plea for a new paradigm. The authors hook readers by opening with stories about concussion’s impact on famous figures, including Henry VIII, Mary Lincoln, Howard Hughes and Elvis Presley. This eases the transition to Esty’s client histories (using pseudonyms), which are woven throughout chapters that cover what happens physiologically during and after TBI and its manifold physical, psychological, emotional and social consequences. Their experiences personalize discussions about the frequency of misdiagnoses, overreliance on pharmaceuticals, the efficacy of neurofeedback to treat TBI and its role in conjunction with other therapies. Esty and Shifflett catalog the abundant chances for brain injury in modern life, particularly in sports, and dispel popular myths that lead to downplaying risks and tolerating repeated exposures. Citing evidence suggesting that frequent smaller injuries are as dangerous as large ones, they document how neurofeedback has brought relief even decades later, helping sufferers reduce or eliminate medications. While neurofeedback results seem miraculous, the authors avoid cure-all claims by discussing unresolved symptoms and physical distortions that brain wave treatment cannot fix. They acknowledge that science cannot yet explain why neurofeedback works—a valid source of skepticism. Critics may question whether the authors have cherry-picked examples to support their case, but the successes provided, often in clients’ own words, speak for themselves. The text is written clearly enough to engage lay readers while still providing the thoroughness and documentation demanded by professionals. They cite more than 300 references, mainly scientific journals and academic books, but they also draw from popular media to keep the discussion relevant and down-to-earth. Clear figures, photos and illustrations; a glossary; and a list of supplemental resources make the book even more user-friendly.

An eye-opener for anyone concerned about concussion—which the authors persuasively argue should include everyone.