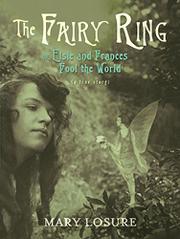 Or Elsie and Frances Fool the World

The remarkable, true story of a fairy hoax successfully perpetrated by two young girls in the early 1900s offers a fascinating examination of human nature.

It began innocently enough; cousins Frances, 9, and Elsie, 15, took pictures of cutout paper fairies in order to get their families to stop teasing Frances, who claimed to have seen real ones in the woods behind their house. It escalated when Elsie's mother mentioned at a Theosophist meeting that her daughter had taken a picture of fairies, perhaps not anticipating the ensuing furor. Eventually, a number of otherwise intelligent adults came to believe these photos were real, most prominent among them Sir Arthur Conan Doyle. It's an incredible story, but this compelling account explains step-by-step how the situation escalated; as time went on, more people became personally and financially invested, and it was increasingly difficult for the girls to consider coming clean. The narrative is matter-of-fact and reserves judgment on the perpetrators as well as their credulous public. The fairy photos are reproduced, allowing readers to see exactly what people at the time saw.

This addition to the pantheon of great hoaxes, such as The War of the Worlds Halloween broadcast, reveals a perpetual human fascination with the supernatural and a strong desire to believe in the unseen.