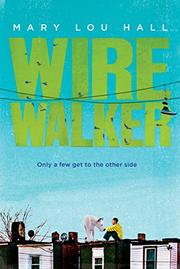 Clarence, 14, saw his African-American mother shot and killed in their Richmond, Virginia, home; three years later, he and his hard-drinking, Irish-American dad live off Johnnyprice’s dogfighting and crack-dealing business.

Delivering crack to Johnnyprice’s customers, Clarence dreams of escape, of becoming a superhero like Batman, taking comfort in the memory of his mother and his bond with a customer’s affectionate Great Dane. Working for Johnnyprice’s higher-paying competitor, Y, brings risks and rewards. In high school, perennial A student Clarence impresses a kindly black teacher, who asks him to mentor a troubled white boy. (How he earns his A’s under hellish conditions isn’t described.) With some missteps, Clarence begins to shape his destiny. After a powerful first half, increasingly one-dimensional characterization hampers the novel. Whether evil or angelic, victim or victimizer, all share a profound isolation, and race is treated as irrelevant to outcome. Clarence is abused by his father, ignored or rejected by relatives. Though both mentor and mentee, he lacks peer friendships. Likewise, the neighborhood—populated by addicts and dealers—seems adrift from the rest of the world. Current cultural referents, such as cellphones, are puzzlingly absent. Crack’s the drug of choice; policing and the criminal justice system play no role. Without history, community, or culture, it’s a jungle or prison—here, decency resides only in individuals.

Glorifying individual achievement without addressing the complex, ongoing legacy of race and racism, this naïve fable fails to convince.