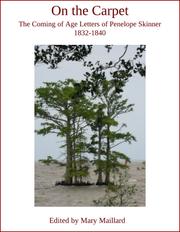 “On the carpet,” in the parlance of 1830s America, meant to be under consideration; applied to young women, it meant being on the marriage market—and in constant danger of being replaced by fresher stock. Such concerns underlie many of the letters here written by and to Penelope Skinner (1818-1841); the chief correspondents are her brother Tristrim Lowther Skinner (1820-1862); her father, Joseph Blount Skinner (1781-1851); and the husband she married in 1840, Dr. Thomas Davis Warren (1817-1878). (The originals are among the Skinner Family Papers, University of North Carolina at Chapel Hill, Southern Historical Collection.) In this scholarly, thoroughly researched account, Maillard (The Belles of Williamsburg, 2015, etc.), a Skinner descendant, has assembled a valuable collection of primary sources and provided illuminating notes, comments, illustrations, and an extensive bibliography and index. The letters begin in 1832 with a joint missive from the Skinner children to their father expressing concern over a cholera epidemic and end in 1841 with a condolence note to Penelope’s father after her death—indicative of the 19th century’s many dangers. Readers learn about Penelope’s schooling, homesickness, her close relationship with her brother, and episodes of depression. Many letters ask after family servants, such as “Aunt Barbara,” the child’s African-American nanny. The Southern belle is an archetype, but it’s established in most readers’ minds by popular conceptions like Gone With the Wind. This volume gives direct insight into the complicated, chancy world of matchmaking. Letters are filled with Penelope’s worries about being “on the carpet,” and competitive, catty remarks about other girls: “I should be pleased also to hear from Mary Mosely is she as large as ever,” she writes in 1839. Though considered thin-faced and sallow, Penelope had 30 offers and three failed public engagements; suitors were perhaps put off by her father’s “queer ways.” It’s poignant that achieving her main goals, marriage and childbirth, brought about her early death.

A fascinating, scholarly glimpse into what it meant to be a Southern belle.