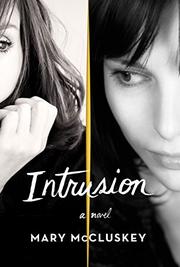 A couple mourning the death of their teenage son in a freak accident confront past secrets while facing the uncertain future of their marriage in McCluskey’s debut.

Kat and Scott are struggling to navigate a world made brittle by grief. Kat, unable to cope with most day-to-day tasks, resents the way Scott, a corporate lawyer, buries himself in work to escape the pain. When she has to accompany him to an evening event, she's shocked to discover that his new client is a rich widow who used to be one of her own best friends. It’s been 20 years since Sarah Cherrington cut a swath through the conservative Catholic school where she met and dazzled young Kat; the two were inseparable, drawn to one another as misfits despite being complete opposites. But a dramatic falling out when they were in college broke up their friendship, and they haven’t communicated since. Sarah, once a poor orphan, has realized her greatest dream: she is extraordinarily wealthy, and her business acumen and ruthless demands to get what she wants make her a desirable but demanding client for Scott. Meanwhile, Sarah reaches out to Kat, offering her a second chance at motherhood through her connection to an adoption charity. When Scott denies Kat’s request to consider adopting, the fragile shell of their marriage begins to crack. This novel raises comparisons to Gone Girl and some of the other recent stories about characters who aren’t who they seem, but McCluskey’s beautiful prose elevates it above most of them. Her descriptions of both place and people are lush: "Kat woke early, as the sun was rising and the light changing from gray to gold....The gardens, with their fine morning mist, looked enchanted. She stood still for a while, breathing it all in, until she noticed that the patio doors were open and, as she watched, Sarah, in a cream-silk shirt and loose pants, came out." In contrast, the dialogue is simple and true. Above all, this is an exploration of the cost of grief and how it isolates even those who share the same loss. But McCluskey also suggests that everyone has the capacity to find the way through this lonely darkness and reach healing on the other side.

Haunting and lyrical, understated and true.