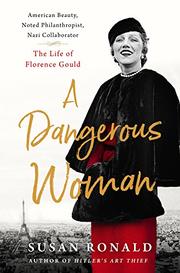 A biography of a seductress, gold digger, and Nazi collaborator.

As Ronald (Hitler’s Art Thief: Hildebrand Gurlitt, the Nazis, and the Looting of Europe’s Treasures, 2015, etc.) repeatedly asserts, Florence Gould (1895-1983) was “an unmitigated snob and egotist” whose only goal in life was “having a good time in high society.” Born in America to French parents, Gould had aspirations to become a world-famous opera singer; when her talent did not measure up to her outsized self-assessment, she became a chorus girl. After divorcing her wealthy first husband, she caught the eye of Frank Gould, the alcoholic son of railroad magnate Jay Gould, whom she wrested away from his second wife. Frank provided her with jewels and a string of hotels and casinos in French resorts. He also had a predisposition to collecting his own coterie of mistresses while she thrived in the company of “pretty boys” and lovers, including the besotted Charlie Chaplin. Gould’s “beauty, charm, and fabulous wealth had become a deadly man magnet,” Ronald writes. She had a reputation “as a lioness, devouring the men she wanted at will.” Drawing on many published sources, newspaper reports of Gould’s scandalous escapades, and Gould’s often fraudulent testimony when she was interrogated as a Nazi collaborator, Ronald conveys the glittering surface of Gould’s life. Without intimate correspondence or diaries, however, she fails to uncover her subject’s feelings, motivations, and thoughts, resulting in a one-dimensional portrait of an astonishingly selfish woman. Chronicling her many affairs and swirling social life, Ronald homes in on Gould’s liaison with Ludwig Vogel, a former German Luftwaffe officer, who became her lover and protector during the Nazi occupation of France, one of “a dizzying, revolving door of German men.” Vogel, though, was the most important, keeping Gould supplied with all manner of “delectable treats” while most Parisians were nearly starving. Although doggedly investigated after the war, not least for her part in a money-laundering scheme, Gould suffered no reprisals, devoting herself to art, music, and pleasure.

A light, lively narrative about a singular, narcissistic woman.

THE PIRATE QUEEN
by Susan Ronald

PARIS AFTER THE LIBERATION
by Antony Beevor
Nonfiction

PARIS AT THE END OF THE WORLD
by John Baxter
Nonfiction

SLEEPING WITH THE ENEMY
by Hal Vaughan
Nonfiction