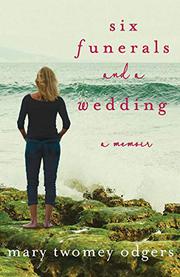 SIX FUNERALS AND A WEDDING

While living in San Diego in the late 1970s, the author met her future husband, Bruce, a U.S. Navy pilot. They were married in 1979, and he later became a pilot for Delta Airlines. The couple moved to Plano, Texas, where their three sons were born. In 1992, they moved to Ramona, California, where they had “9.3 acres” overlooking the Santa Maria Valley. Bruce designed every aspect of their custom-built house as meticulously as he approached his career as a pilot. But 15 years later, in 2007, Santa Ana winds attacked with a vengeance, and a wildfire swept through town. Odgers’ beautiful home and all of its contents were destroyed—and this was only the first in a series of tragic events. The author writes in her introduction that just one year later, “in a span of eight weeks, I lost my husband, my father, and my youngest son” in “traumatic ways.” In separate chapters, Odgers writes movingly about each of her deceased family members, describing in detail her evolving and unique relationships with each one over the course of their lives. She also effectively defines the particular contours of her grief in each instance, which range from crushing pain to sad acceptance. The book is essentially several short, separate vignettes that, taken together, paint a heartbreaking portrait of love and loss. The final two chapters are infused with joy, however, detailing how she found the resilience to rebuild her life and find a new love. Now, she says, she’s ready to share her story in order to offer encouragement to others who may be navigating grief: “Don’t stay in the fertile rut of victimhood,” she writes. A satisfying complement of family photos helps fill in the narrative.