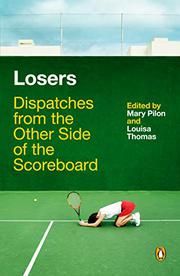 Dispatches From the Other Side of the Scoreboard

Essays from the realm of competitive sports focusing on losing, which “reveals something raw about what it means to be human.”

A few of the bylines are well known, especially Gay Talese (his oft-anthologized 1964 Esquire profile of Floyd Patterson) and Arthur Conan Doyle (1908 Olympic marathon). Refreshingly, though, most of the contributors are less well known to general readers, and their subjects range from obscure to famous. Some of the essays were previously unpublished while others appeared in the Wall Street Journal, New York Times, the Believer, and other venues. As a collection, the book holds together well even for non–sports fans, though some readers may wish for value-added material such as postscripts or updates. Pilon and Thomas, who both write for the New Yorker and other publications, each contribute an essay. In her piece for that magazine, Thomas focuses on the pressures of the professional tennis tour via a profile of Nick Kyrgios, the volatile Australian who cannot seem to reach his potential in front of tournament crowds. “At some point in every match,” she writes, “he tends to do something brilliant—or he snaps.” Pilon’s piece, published in 2013 in the Times, is set in the world of low-level mixed martial arts, “shadow fighting circuits” that are “far from the bright lights of professional matches.” For basketball fans, Charles Bock offers “The Sporting House,” about an ill-fated star in 1980s Las Vegas, a time when UNLV was the best show in town. Baseball fans will enjoy Bob Sullivan’s “Yankee Strike” and Abby Ellin’s “Larry and the Ball.” In “Banderillero,” Barry Newman writes about bullfighting, an endeavor relatively unknown to American readers. Mike Pesca investigates the many faces of losing and how many “come so close they can taste it, only to be left lapping at the dust of their rivals.”

In the introduction the editors write, “this book is for the losers—which is to say, for all of us.” They deliver.