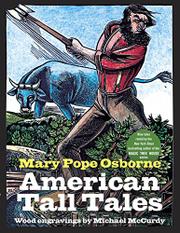 For the 90's, a handsome, well-documented collection of stories about nine uniquely American characters. In her intelligent introduction, Osborne explains their genesis ``from various combinations of historical fact, the storytelling of ordinary people, and the imagination of professional writers'' and notes that changing times put a new light on stories deriding various groups (including women and even animals). Thus her intention is to emphasize ``gargantuan physical courage and absurd humor'' and to ``bring out the vulnerable and compassionate side'' despite the stories' ``ineradicable taint of violence.'' Osborne succeeds pretty well in her intention, piecing together stories that make fine introductions to characters like Mose and Stormalong. Her approach suits Johnny Appleseed and John Henry better than it does Davy Crockett battling a panther, but she does manage to put a new slant on Pecos Bill and his bouncing bride without undermining the story (there's no question of a wife's disobedience here; Sue wants to ride Bill's horse as a test of skill). The telling is more polished than lively—Glen Rounds's irrepressible wit (Ol' Paul, the Mighty Logger, 1949) is more fun, but these versions are perfectly acceptable. McCurdy's vigorous wood engravings, tinted with lucid color, contribute a rugged frontier flavor; lively, though a bit formal in style, they suit the text admirably. Each story is introduced by source notes; a story-by-story bibliography provides a good roundup of this popular genre. (Folklore. 6-12)