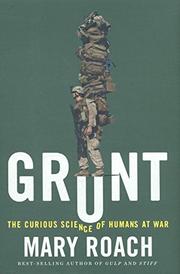 The Curious Science of Humans at War

A cannon fires grocery chickens at parked jets, testing ways to protect planes against bird strikes. Readers encountering this esoteric project on the first page will settle back to enjoy another patented scientific romp, this one on battlefield research, by journalist Roach (Gulp: Adventures on the Alimentary Canal, 2013, etc.).

“For every general and Medal of Honor winner,” writes the author, “there are a hundred military scientists whose names you’ll never hear. The work I write about represents a fraction of a percent of all that goes on. I have omitted whole disciplines of worthy endeavor.” Roach reveals many of these names, however, along with the stories of their quests to shield soldiers from harm and, if this fails, repair the often gruesome results. Traveling from proving ground to lab to expensive, realistic fake battle settings, the author recounts and often participates as researchers search for better ways to protect soldiers from bullets, burns, explosions, noise, heat, sharks, insomnia, drowning, and disease. If all fails, the military wants to correct the consequences with better prostheses and surgical reconstructions of mutilated or missing body parts. Roach joins Malcolm Gladwell and Steven Levitt in making a career of turning serious research on oddball subjects into bestsellers. But while Gladwell and Levitt aim to stimulate readers with unusual connections among subjects, Roach, the author of Stiff and Bonk, is mostly seeking laughs. She restrains herself when it’s inappropriate (an admirable chapter on repairing damaged penises) but never resists easy targets (blast-resistant underwear, the macho approach to diarrhea) and works hard to find humor wherever she turns. When material runs thin, the author inserts breezy anecdotes, descriptions of her surroundings, the scientists’ physiognomy, and the sufferings of a journalist willing to try anything.

Battlefield R&D is a topic too fascinating to ruin, so readers who can tolerate the author’s relentless flippancy will not regret the experience.