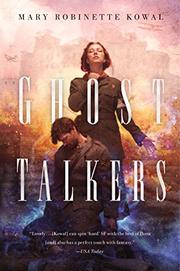 The terrible death tolls of World War I are revisited in an alternate history where the spirits of the dead can be interrogated for valuable military intelligence in another historical fantasy from Kowal (Of Noble Family, 2015, etc.).

As with her Glamourist series, Kowal follows a recipe of “headstrong young woman + magic + historical period, heavy on the patriarchy.” This time it's the first world war, and our protagonist is Ginger Stuyvesant, an American heiress and spiritual medium engaged to a British intelligence officer. In France, a special site has been created where dead soldiers give their final reports to Stuyvesant and other mediums. It's a closely guarded war secret, and the Germans scheme to learn it for themselves—or to destroy the mediums. But when something happens to Ginger's protective fiance, Ben, Ginger must navigate wartime bureaucracy, misogyny, racism, intrigue, and treachery on her own. She is helped by young Merrow (Ben's batman); Mrs. Richardson, a middle-aged "anchor" to the mediums; and the limited assistance Ben can provide. But can she trust anyone...even Ben? Ginger's hunt for the truth takes her from infirmaries to the front lines, but the dead are everywhere, and keeping her own soul intact in the face of their pain will be the hardest battle. No need to worry, though—as a heroine, Ginger is plucky, resourceful, upright, and flawless; the good guys all tend to be, here. Ginger's victories over both German plots and the social injustices of her day won't feel terribly surprising, but they may scratch an itch for readers satisfied by such.

A fascinating premise somewhat burdened by workaday execution and pat characterizations, but fans of Kowal's formula will be charmed.