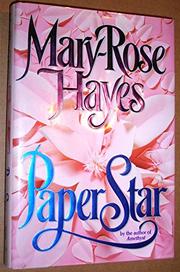 A half-baked pop-fiction casserole by Hayes (The Winter Women, Amethyst) about three brat-packish bosom buddies who come of age in the eye of a veritable tornado of outlandishness. Take poor Saint (Sloane St. John Treadwell, Jr.), a maladjusted rich kid turned writer of trendy novels and screenplays. In Hayes's garbled words, ``It was a desolate thing to find out he was not a Treadwell, that his father had never been his father.'' He grows more desolate still when his ``sexually ravenous'' wife gets him put into a Mexican jail and he learns that his real dad is Victor Diamond, an insane Hollywood producer scheming to start a master race of...megalomaniacal Hollywood producers. Fortunately, Saint's two best friends stand by him. They are the talented but fat British girl Vera Brown, who creates a superwoman comic-strip called Starfire,'' which Saint publishes (``I just got a lot of money, Vera. Five million dollars. I was wondering what to do with it''); and the much abused and thus frigid Texas beauty J.B. Feeney, who plays the lead in Starfire: The Movie and sells herself to Diamond in exchange for help getting Saint out of jail. The climax to the whole megillah comes during filming of Starfire II, on a Mexican beach where Saint finally figures out he loves Vera; an unlikely Napa Valley doctor releases J.B. from bondage to the producer; and Diamond loses his head (in the literal sense) thanks to the skillful machete-wielding of a Mexican drug-dealer. Patently ridiculous, utterly 2-D, though it might attract a high school readership, since it's the sort of book adolescents would be tempted to hide behind their algebra texts.