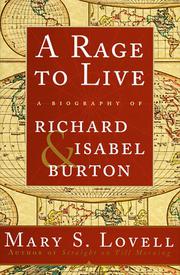 A RAGE TO LIVE

A Biography of Richard and Isabel Burton

A refreshing historical narrative, from Beryl Markham biographer Lovell. Sergeant Joe Friday would have approved of Lovell’s investigative technique: just the biographical facts, ma’am. She takes the linear route, starting at the beginning and ending at the end, which is not to say the book is without filigree or incapable of veering off into various interesting byways. Material that has been handled in any number of biographies of Richard Burton is presented here with a storyteller’s grace. One reads of his vagabond youth, when he was a hellion and snubber of authority; his sensual and intellectual hunger, his ability to sop up knowledge and languages like a sponge; the African and Arabian exploits, the sunstroke, dysentery, malaria, syphilis, agues, lameness, and blindness. And there are the controversies, with his colleague John Speke, with the prim hypocrites of Victorian England, with everybody at the British Foreign Office. Lovell does an equally thorough job with Isabel: the tony youth, the London season and the circuit of balls, through the years working and traveling with Richard. What Lovell offers that is new is acute observations (mostly the result of finding untapped caches of primary documents) regarding the nature of Richard and Isabel’s relationship (it appears, contrary to accepted folklore, to have been amorous and loving), and Richard’s sexuality and pursuit of erotica (Lovell ventures opinions only when supported by historical evidence——I confess to a sinking feeling when I see phrases such as ‘he was tortured by sexual guilt’ in any biography”). She also has some sensible things to say about Isabel’s purported torching of Richard’s manuscripts—including both copies of the erotic The Scented Garden—after his death. It is a pleasure to read someone who takes such obvious joy in her art: the broad biographical canvases, the tableaux vivants, the little mysteries that delight and vex her. The Burtons inhabit these pages, not as ghosts, but as presences. (photos, not seen)