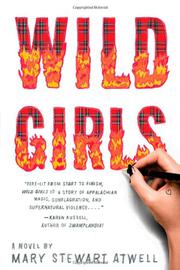 In the dying Appalachian town of Swan River, Kate Riordan attends the rather elite Academy for Girls. She’s a local girl, torn between her hometown roots and her desire to escape.

Atwell’s debut novel examines the violence simmering among adolescent girls and their friendships. Kate’s mother and older sister seem stuck with dead-end jobs and underwhelming boyfriends. Swan River is cursed not only with simmering rage rooted in economic failure, but also with its shrouded history of wild girls. Every so often, teenage girls suddenly begin to glow, set things on fire with just their fingertips, massacre townspeople and sometimes even fly. The danger seems to derive from the poorest section of town, Bloodwort Road, where the witchlike Mrs. Lemons tells frightening fortunes; her daughter Crystal seems particularly unstable; and her son Mason seeks his own escape by dating Academy girls. Yet, the Academy isn’t as far removed from Bloodwort Road as Kate hopes. Her best friend, the popular Willow, is adept at collecting girls—her minions, as Kate mockingly calls them—yet she convinces Kate to set her up with Mason. Kate’s other best friend, Caroline, has already begun researching the history of the wild girls. Dr. Bell, the Academy’s headmaster and teacher of “Myths and Mysteries,” stokes her interest in the local legend by linking it to the disturbing Greek maenads. When Crystal turns wild one night, burning down most of Bloodwort Road and Willow provokes Mason into a jealous confrontation, Kate begins to realize that Mason and Swan River may mean more to her than Willow and the Academy. But the wilding isn’t over yet. Unfortunately, the suspense drags rather than builds, and events move along sluggishly toward a predictable confrontation.

These girls are less wild than troubled.