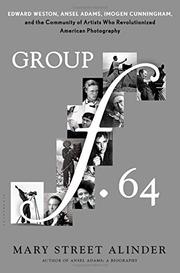 In the 1930s, daring young artists invented a distinctive style of photography.

At a party in October 1932, a group of California photographers decided to band together for exhibitions, calling themselves f.64, a name, they explained, “derived from a diaphragm number of the photographic lens. It signifies to a large extent the qualities of clearness and definition” that defined their work. Alinder (Ansel Adams, 1996, etc.), who served as assistant to Adams, one of the most well-known members of f.64 and author of its manifesto, comes to this group biography with personal knowledge of many of her subjects, including Imogen Cunningham, Willard Van Dyke, Brett Weston and Preston Holder. As collaborator on Adams’ autobiography, she became intimately acquainted with the life and work of many of the other members. Group f.64 arose partly in reaction to Alfred Stieglitz, founder of the Manhattan galleries 291 and An American Place, who “had ruled as the largely unchallenged master of creative photography in America for three decades.” Coveting “the grace of his recognition,” the California group nevertheless believed that a Western aesthetic was far different from the photography heralded in New York and also from the popular genre of pictorialism: romantic, painterly images produced by soft-focus lenses and printed on matte, textured paper. The group’s first major exhibition opened at the respected M.H. De Young Memorial Museum in San Francisco, mounted by its intrepid director Lloyd Rollins. Among 64 prints were Adams’ rugged landscapes and Weston’s sensuous rocks, shells and vegetables. Although the exhibition did not attract much notice, it inaugurated for the exhibitors a period of “explosive creativity.” From 1933 to 1940, their work appeared in galleries and museums, making them increasingly visible and earning wide acclaim.

Alinder's sympathetic history captures the excitement and energy of determined artists who invigorated and redefined the art of photography.