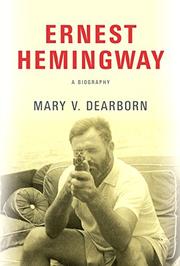 The rise and fall of the Nobel Prize–winning writer.

Dearborn (Mistress of Modernism: The Life of Peggy Guggenheim, 2004, etc.), whose previous biographical subjects include Norman Mailer and Henry Miller, writers noted for their boastful machismo, distills a wealth of material for a richly detailed investigation of another writer intent on proving his vigor and manliness, on the page and off. The author writes that she has “no investment” in promoting the Hemingway legend but rather seeks to examine “what formed this remarkably complex man and brilliant writer” by tracing his career as it unfolded. That aim results in a scrupulous chronology, from which the usual suspects emerge: Hemingway’s wives; famous friends F. Scott Fitzgerald, Sherwood Anderson, Robert McAlmon, Gertrude Stein, and Ezra Pound; an ambitious mother, depressed father, and Hemingway’s sons. Even without attempting to burnish the Hemingway legend, Dearborn underscores the charisma of the handsome, athletic man who, critic Edmund Wilson remarked, had an “ominous resemblance to Clark Gable.” Nevertheless, she is clear about his shortcomings, especially his neediness and violent temper. “As long as people around him were worshipful and adoring,” one friend noted, “why then they were great.” If the adoration stopped, they were viciously cut off. This truculence began in childhood and intensified into paranoia as he aged. Also intensifying were Hemingway’s manic episodes, followed by black depressions. Dearborn asserts that this syndrome worsened after a series of traumatic brain injuries and was exacerbated by excessive consumption of alcohol. Not surprisingly, he ended up with liver disease, and although his physicians insisted he give up drinking, he never did. Taking on the question of Hemingway’s sexuality, Dearborn believes that his mother’s practice of styling him and his sister as twins until her son was 6 had lifelong repercussions, including his erotic obsessions with haircuts and color on which Dearborn focuses repeatedly.

A thorough, but familiar, portrait of a tormented artist.