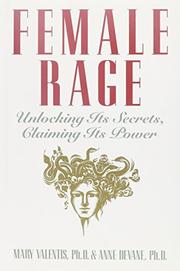 Unlocking Its Secrets, Claiming Its Power

This concise overview and defense of women's fury and its constructive potential is a rehash of feminist writings of the past two decades. Valentis and Devane (both teach literature at SUNY Albany) begin by documenting the numerous ways female rage has historically been stigmatized (as hysteria, as erotomania, as evil) in art, literature, psychotherapy, and the media—from Ovid and Freud to Snow White's wicked stepmother and Fatal Attraction. Given these images, they say, it is not surprising that women succumb to social pressures to be attractive, pliant, and self-sacrificing or that they sometimes mask socially unsanctioned feelings of anger with smiles, depression, phobias, panic attacks, or passive-aggressive behavior. Nonetheless, female rage is real (best illustrated, the authors say, by the Lorena Bobbitt case and many women's support of her actions) and is now ``loose in the land.'' Their favorite symbol—the ``gatekeeper of the secret realm of female rage''—is Medusa, a once-beautiful maiden who was violated by Poseidon, turned into a hideous beast, and finally slain by Perseus. Recasting Medusa as a symbol of female strength and sexual power, the authors recommend that, instead of repressing or denying their anger, women get in touch with their inner Medusa, utilize their power, and find rational ways to direct their rage. Many of their examples are drawn from interviews describing various personal confrontations (such as discovering a partner's infidelity), and the question of how issues of female rage are or should be handled in professional or political contexts is largely ignored. This omission exemplifies the lightweight tone of the book. Despite some good advice to women on handling rage, this often reads like a collection of articles from glossy women's magazines (a quiz in the appendix is called ``How Enraged Are You?''). A lackluster contribution to the literature of female empowerment. (40 b&w illustrations, not seen)