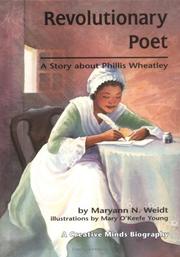 Subtitled 'A Story About Phillis Wheatley,' this is a clear, straightforward account of the poet's life. Weidt (Daddy Played Music for the Cows, 1995, etc.) makes plain the facts: In September 1773, at the age of 20, Phillis Wheatley became the second American woman to publish a book—and the first African- American of either gender to do so. She had arrived in Boston 13 years earlier on the slave ship Phillis, a frail, sickly child who spoke no English. Wealthy Bostonian Susannah Wheatley bought her for her household, where, as Weidt explains, Phillis was better treated that most slaves of the time. While a few more examples of the poet's work would have been welcome, this biography gives middle-graders a solid introduction. Young's black-and-white illustrations enhance the text, showing many telling details of colonial life. (bibliography, index) (Biography. 8-12)