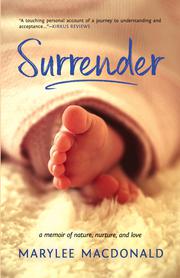 A Memoir of Nature, Nurture, and Love

A memoir examines the complex psychological impact of adoption.

MacDonald was born in 1945. Her biological mother was 16 years old and unmarried. The baby was put up for adoption, and, at 6 weeks of age, the author became the daughter of Rex and Lorene Benham. The moment she joined the Benham family, she writes, was the beginning of her “origin story.” Sixteen years later, history would repeat itself when MacDonald found herself entering the Phoenix Florence Crittenton Home for unwed mothers. She had hoped to keep the baby and marry her boyfriend, John. But they were underage; his father was against the marriage; and John wanted to go to West Point the following year. Plus, MacDonald knew that her mother was upset about the pregnancy. In January 1962, the author gave birth to her son. She saw him for only a moment. It would be 21 years before they would meet. John and MacDonald did in fact marry two years later. They ultimately had four children, in addition to the one she surrendered. The author is in a unique position to discuss the trauma of adoption from two sides—as an adoptee who always felt she didn’t belong and as a mother who endured the initial anguish of giving up her baby and the many years of worrying if he was well or even alive. The articulate narrative includes sections that review MacDonald’s childhood and teenage years and some vivid scenes depicting her anger and despair while at the Crittenton Home. But it is decidedly focused on the displacement that author Nancy Newton Verrier wrote about in her book The Primal Wound. Some therapists explain that this wound is the psychological pain adopted infants feel when they are denied physical contact with the women with whom they have established neurological and biochemical connections. MacDonald describes it more viscerally as a wound that leaves a permanent scar: “Adoption creates a deep scratch on the LP of the soul. Every time the record revolves, the needle drops into that scratch.”

A touching personal account of a journey to understanding and acceptance; informative and unsettling.