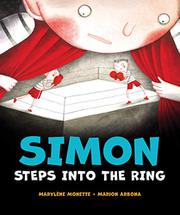 SIMON STEPS INTO THE RING

by Marylène Monette ; illustrated by Marion Arbona ; translated by Sophie B. Watson

Regulating emotions can feel like a never-ending boxing match.

Simon doesn’t know what to do; he’s lost his temper at school again. Uncle Richard, who moved in with the family when Dad left, says there are lots of different puppets inside of Simon representing different aspects of his personality. There’s Simon the Fearful, dreading the consequences of his actions; Simon the Arrogant, who hurls insults at his classmates; Simon the Good Student, who makes comics in art class; and so many more. Like boxers, they compete for dominance. Uncle Richard reminds Simon that all the puppets can be useful, but only at the right time. The key is to listen to the “little referee” inside to make the right decisions. It won’t be easy, but Uncle Richard is proud of Simon for continuing to work at regulating his emotions himself. Originally written in French by a former teacher and pedagogical counselor, the book offers backmatter activities that encourage socio-emotional exploration. The text toggles among first person as Simon describes moments from his day, third person, when Simon introduces a particular puppet, and snippets of dialogue. Although the boxing metaphor has a strong start, it fails to follow a consistent pattern. Consequently, the strong beginning and ending bookend a rather meandering middle section. Stylized illustrations depict fair-skinned characters with round, rosy cheeks and black hair. The limited palette of gray, red, black, and white relies heavily on patterns and shadows created with meticulous pencil strokes. Arbona uses perspective and angle to draw focus, often exaggerating the size of one element to emphasize Simon’s feelings.

A useful tool for instigating socio-emotional discussions with children despite the muddied metaphor.