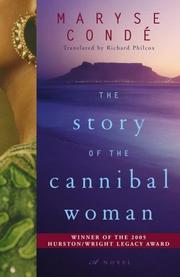 THE STORY OF THE CANNIBAL WOMAN

Caribbean painter reels from the aftermath of her lover’s murder in Cape Town, South Africa, in this retread of Condé’s usual themes: racial alienation and women’s struggles for autonomy (Who Slashed Celanire’s Throat?, 2004, etc.).

Rosélie has been reduced to telling fortunes and giving therapeutic massages after her white partner, English professor Stephen, whose proposals of marriage she’s ducked for 20 years, is killed, supposedly in a robbery, outside a convenience store where he’d gone to get cigarettes at midnight. The homicide detective on the case doesn’t buy it, but Rosélie’s too preoccupied with ruminating about her past to provide many clues. First, there is the estrangement from her Guadeloupean parents, genteel Creole Rose and rakish mulatto Elie. Traveling to Paris, Rosélie meets reggae star Salama Salama, who takes her to N’Dossou, Africa, then abandons her for a more advantageous marriage. After dabbling in prostitution, Rosélie encounters Yeats scholar Stephen in a N’Dossou bar, and the two are off to New York City, where Rosélie has an affair with Ariel, who runs a progressive school in the Bronx. Since Stephen wants to experience Cape Town after apartheid, they decamp again, and Rosélie tries to concentrate on her painting. Resentful of the hateful stares her relationship with Stephen elicits, Rosélie closets herself in her studio, admitting only her maid and friend, Dido. Only after Stephen’s death does she suspect his young male protégés, and she embarks on an investigation of her own. Suspense is beside the point, as is characterization of the ever-faithful-in-his-fashion Stephen, whose “secret” is telegraphed from the beginning. This is Rosélie’s story as she internalizes centuries of racial and sexual enslavement and, like other Condé heroines before her, decides that her salvation lies in shedding all impediments, internal and external, to self-expression.