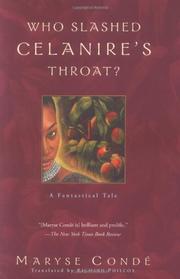 In the 1880s, an infant is found on Guadeloupe with its throat slit, not an isolated phenomenon on this isle where the demons cultivated for personal and political gain prefer babies as sacrificial victims. Kindly but debauched Dr. Jean Pinceau (aping his hero, Dr. Frankenstein) reattaches Celanire’s head and adopts her. After goading her adoptive mother fatally into the jaws of a mysterious black dog, Celanire attempts to seduce Pinceau, who is wrongfully convicted of child rape and exiled to the penal colony of French Guiana. And that’s just her first ten years. Entrusted to nuns, Celanire is educated in France and travels as a missionary to colonial Ivory Coast. A beauty whose swan neck is never without scarf, necklace, or ribbon, Celanire captivates both sexes as she sets about revamping a home for illegitimate children, turning it into an elite academy by day, salon/bordello by night. Anyone who resists her charisma, like the hapless homosexual Hakim, is doomed, as is anyone she finds inconvenient. On the surface, Celanire is an envoy of civilization who cultivates elaborate gardens and rails against female circumcision and oppression of women. Wrested back from sacrifice, she’s the double-agent of the unpropitiated demon-gods. Her acts serve twin mandates: to avenge herself on everyone connected to the sacrifice, and to discover her true parentage. The action spans four tropical climes: Africa, Guiana, Guadeloupe (where the former foundling returns in grim triumph as the governor’s wife), and Peru, where an exorcism of sorts occurs. The body count mounts as do Celanire’s shape-shifting forms—large mastiffs, a stallion, a raptor bird, and—a waitress? Condé (Tales From the Heart, 2001,etc) sets herself a fearsome challenge: an implacable trickster can hardly engage our sympathy, despite her cultivated veneer.

Lush and lurid, as are its sultry settings: an intricate brocade conceals its blemishes, seducing the reader with silken irony.