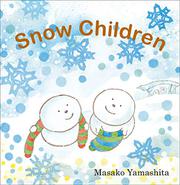 Two snow children, concerned about the effects of global warming, attend an international meeting where, after some dissension, all agree it is time to work together to do something about it.

On their journey, Yuta and Yuma encounter rabbits buried in a surprising avalanche, polar bears unable to hunt on the broken-up ice and caribou whose food is hidden in the deeper snow—all actual effects of recent climate changes. The tale becomes more fantastic as northern lights carry the pair off to their meeting, which begins with food: crispy and sweet snowballs. It is the beauty of new, falling snow that convinces the assembled snow people to cooperate. This simple, child-friendly story is framed by an opening spread (in a different typeface) defining global warming and the usual suggestions on the concluding endpapers for what children can do. Yamashita illustrates with pastel watercolors and Japanese paper collage, distinguishing the two snowball children by hat and muffler. The star-spangled Arctic sky and northern lights are particularly effective. Later, as people disagree, the sky becomes an angry red or green, and, curiously, pale red remains the color of the snowflakes even at the end.

A gentle, well-meant introduction to climate change (a phrase the author doesn’t use) that's suitable for preschoolers, if there seems to be need. (Picture book. 3-5)