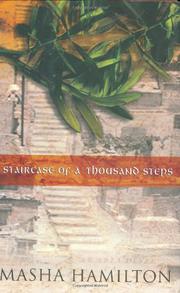 STAIRCASE OF A THOUSAND STEPS

First novel, set in 1967, about a young Arab girl who dreams of the past—and foretells the future.

Jammana is 11, but her memories are much older. She’s not the first in her family to be both blessed and cursed with second sight. Her great-great-grandfather foretold a lifetime of troubles for her beloved grandfather Harif. First, his mother, Alula, a spirited and lovely woman, was struck by lightning during a freak storm. The shattered stump of the tree where she died was revered by the local women, but the bereaved boy soon became an outcast in the village of Ein Fadr, shunned by resentful neighbors who thought he now possessed knowledge of their secret sins and desires. Harif became a shepherd, wandering the hills of Samaria with his flock. His secret love was a near-outcast herself, although Alula was one of the few who showed her any kindness: Faridah, the midwife, who was married at 12 and divorced by her husband at 18 for her childlessness. Independent by circumstance and by nature, the young woman is also essentially fearless—qualities that arouse the suspicions of the village men. Although it is customary for a barren woman, or a woman past childbearing age, to become a midwife, it is whispered that Faridah is a ghouleh, an evil spirit, because of her knowledge of healing herbs and oils. She ignores it all and lives life on her own terms, becoming pregnant by Harif, by now betrothed to another. She miscarries, telling no one, and continues her work. Almost every soul in Ein Fadr was brought into the world by her skillful hands; and, years later, Jammana is devoted to her, following her everywhere and helping when she can. Still, there are those who hate Faridah: eventually, she’s found dead in a dry riverbed, her throat cut. But by whom?

Former AP Middle East correspondent Hamilton writes with striking clarity, using words as carefully as the Bedouin use water to bring a disappearing world to vibrant life. Here, in a luminous debut, are the voices, real and rarely heard, of traditional Arab women.