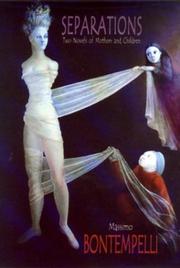 (1878–1960), who is as highly regarded in his native Italy as was his much better-known contemporary (and friend) Luigi Pirandello. `The Life and Death of Adria and Her Children` (1930) is a charmingly discursive sendup of the family saga in which an agelessly beautiful young matron's personality (and, indeed, `soul`) is explored with disarming subtlety and quietly increasing menace. It's a brilliant story, but `The Boy with Two Mothers` (1929) is even better: it's a fable of reincarnation, about a boy who is simultaneously born twice, to different families, on the same day—with enigmatic, disastrous, and blithely hilarious consequences for both (the understandably confused) “Mario/Ramiro` and his stunned `parents.` Limpid, haunting tales, a bit reminiscent of Isak Dinesen and Julio Cortázar (though a better comparison might be to the stories of Bontempelli's Italian counterparts Dino Buzzati and Anna Maria Ortese). Translator Gilson and publisher McPherson have performed a magnificent service here. One hopes they'll be able to bring us more of Bontempelli's strange and enchanting fiction.