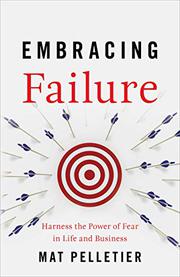 Advice for budding entrepreneurs about the fear of failure.

The message of this debut can be easily summed up in a phrase from its opening chapter: “fear and adversity are not your enemies.” They are worthwhile, legitimate concerns, particularly for those who are pondering starting a business; indeed, fear of failure can be paralyzing for many entrepreneurs. Pelletier, a principal at Pelletier Construction Management, draws from his own experience to show how one learns from setbacks, overcomes them, and perseveres throughout one’s career. He refers to a few other figures who found success after failure—such as Matthew Webb, the first person to successfully swim the English Channel—but the book is more about providing advice, rather than examples. The content seems overly familiar at times; for example, goal-setting is found in virtually every self-help book, and a chapter on the downside of “doing nothing” is elementary. A “road map to success” is quite basic as well. However, the book does offer a few memorable ideas, such as the author’s four-step “recipe for success”: accepting risk, experiencing fear, learning from failure, and then repeating the process. The book’s focus on the contrast between the “abundance mindset” and the “scarcity mindset” is also engaging; although it’s essentially another way of expressing the difference between optimism and pessimism, Pelletier offers a clear explanation and provides decent advice on how to change a scarcity mindset. A discussion of “enablers,” who reinforce failure instead of providing encouragement, is similarly worthwhile. Pelletier’s advice about personal financial discipline may be most useful to young entrepreneurs, as when he counsels the reader to “live below your means,” “trust your nest egg,” and “remain humble.” An accompanying reading list of seven books is helpful but could have been more robust.

Sincere and well-intentioned, if somewhat-formulaic, counsel on starting a business.