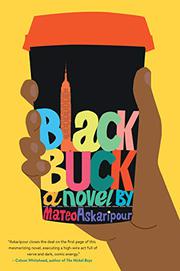 A first novel satirically lays out the wretched excesses of turn-of-the-21st-century capitalism as it both enriches and disfigures a bright young Black man’s coming-of-age.

Darren Vender is a 22-year-old product of Brooklyn’s Bedford-Stuyvesant neighborhood who graduated first in his class at the prestigious Bronx High School of Science but passed on college and is quite happy with his life as a barista at a ground-floor Starbucks on Park Avenue. His life changes on the morning he decides to flash some impromptu genius to a charismatic suit named Rhett Daniels by convincing him to buy a different drink from the one he ordered. “Did you just try to reverse close me?” a flabbergasted Daniels asks before offering Darren a job with a startup sales company called Sumwun located several stories above the coffee shop. Reluctantly, Darren agrees and soon finds himself sharing a lofty, turbulent office suite with several tightly wound Type A White strivers obsessed with closing deals, pleasing Rhett, and rising higher within the company. Because Darren is the first and only African American employee, he has to endure being told by Rhett and other Whites how much he resembles Martin Luther King Jr., Morgan Freeman, Dave Chappelle, and other Black notables who resemble each other hardly at all. He emerges from rigorous, emotionally bruising indoctrination to become a high-octane fast-tracker among Sumwun’s army of sales tyros—and that’s when the money and fame start flowing into Darren’s life along with several layers of trouble, much of it coming when Darren struggles to accommodate his newfound prosperity to the life, along with the family and friends, he’s left behind in Brooklyn. As Darren himself puts it at one point, “The turns in this story are half-absurd, half jaw-dropping, and a whole heaping of crazy.” And, one might add, borderline corny and secondhand in narrative tactics, too. Still, even with its drolly deployed nuggets of sales tips directed at the reader throughout the narrative, the book's biggest selling point is the writing: witty, jazzily discursive, and rhythmically propulsive.

This whole novel comes across like a brash, in-your-face sales pitch leavened with punchy, go-for-broke mother-wit.