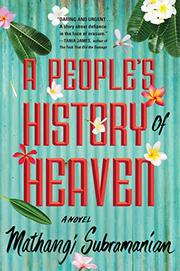 A PEOPLE'S HISTORY OF HEAVEN

A group of Bangalore schoolgirls attempts to save their "slum" from demolition.

Heaven is a place on Earth—more specifically, it’s a slum in Bangalore, India, so named for a broken sign that spells out the Sanskrit word for heaven. For five government-school pupils, it’s the closest thing to heaven they’ve got, so when their homes are slated for demo, they spring into action. As the narrator (a first-person plural voice that encompasses the quintet) notes, “If you need something done, you ask us girls.” “Us girls” are Banu, an artist and handywoman whose grandmother holds a position of prominence as one of the original residents of Heaven; Deepa, whose impaired sight leads her parents to keep her out of school; Joy, who is transgender and an exceptional student; Padma, who came to Heaven from a rural village and whose complex family dynamics put extra pressure on her; and Rukshana, who is coming to terms with her queer sexuality and her status as a Muslim. Though the plot is nominally about the fight to save Heaven, Subramanian (Dear Mrs. Naidu, 2015, etc.) is more interested in episodically filling in the backstories of the five girls and their mothers, in the process tackling some of the most trenchant issues facing Indian women in particular—casteism, arranged marriage, forced sterilization—as well as women all over the world. This is Subramanian’s first novel for adults, although it isn’t fully clear why it isn’t YA. It has the heart-on-its-sleeve melodrama of some of the most successful teen novels and films, though it will likely also appeal to adults wanting to tuck in to a novel which is like the brainy big sister of a Lifetime movie.

A girl power–fueled story that examines some dark social issues with a light, occasionally saccharine, touch.