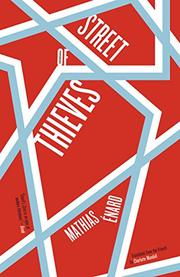 A coming-of-age story that plays out across a contemporary landscape of the Arab Spring and other social uprisings.

Lakhdar, the narrator, begins his story in Tangier, in his native Morocco. He’s obsessed with girls, especially with his cousin Meryem. When he’s caught in a compromising position with her, his father beats him, and his family essentially disavows him. Lakhdar begins to work as a bookseller with the Muslim Group for the Propagation of Koranic Thought, becoming closer to his friend Bassam and to the group's leader, Sheikh Nureddin. This job provides little nourishment for Lakhdar’s restless spirit, however, and neither does a move to a job as a typist with a French businessman. Eventually Lakhdar links up with Judit, a Spanish student studying Arabic in Tangier. We learn that restlessness is not simply personal, but also cultural when violence breaks out in Tangier and Marrakesh. For several months Lakhdar works on the Ibn Battuta, a ferryboat plying the waters between Morocco and Algeciras. Ultimately, he makes his way to Barcelona (where he lives on the eponymous Street of Thieves) to seek out Judit, with whom he’d stayed in desultory contact since she left Tangier, though Lakhdar suspects her passion has cooled. They do get back together, and Judit even helps him get a job tutoring students in Arabic, though their relationship is colored by the discovery that Judit has a tumor. When Sheik Nureddin reappears with Bassam on a business trip to Barcelona, Lakhdar notices how serious and committed his old friend has become—and his worry eventually leads to tragedy.

Énard writes passionately about Lakhdar’s movement from innocence to experience, and the novel’s various settings all ring depressingly true.