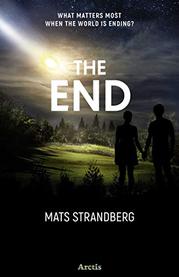 Just over a month—that’s how long humanity has left before a comet named Foxworth collides with the Earth.

Simon wants to spend his remaining days beside his ex-girlfriend, Tilda, who dumped him in favor of experiencing life before their final day arrives. Simon, however, can’t seem to let go while Tilda sheds her old self more than ever, indulging in drugs and random hookups like most of their doom-conscious peers. Things are strained at home, where Simon tries to avoid the rising tensions between himself and his moms, exacerbated by the return of his pregnant older sister. Then Tilda turns up dead and everyone suspects Simon, including Tilda’s former best friend, Lucinda. Lucinda chronicles the chaos around her, as well as memories of her deceased friend, via an app. But as Simon and Lucinda uncover secrets from Tilda’s life, they become obsessed with solving her murder. A sprawling, at times meandering tale, bestselling author Strandberg’s latest moves a day at a time, an uneasy crawl toward the inevitable. Set in Sweden, the novel offers glimpses of turmoil abroad through pointed sociopolitical commentary and oblique observations on race. Although the trite murder mystery threatens to derail the narrative’s emotional impetus, strong character development brings it all together in the end. Most characters are White; Simon is biracial (his biological mother is Black from Dominica and his moms chose a White sperm donor).

Messy, flawed, but utterly brilliant in its humanity.