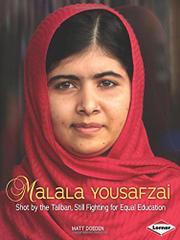 Shot by the Taliban, Still Fighting for Equal Education

A cursory introduction to the Pakistani teenager who earned international attention (and a Nobel Peace Prize nomination) after surviving a Taliban gunman’s assassination attempt.

Doeden draws largely from Yousafzai’s 2013 autobiography and a handful of news reports to craft his account. He explains how she, as the eldest daughter of a dedicated founder of girls schools in Pakistan and co-author (at the age of 11) of a personal blog sponsored by the BBC Urdu, became a public face for Muslim girls’ education—and therefore a Taliban target. Silenced only temporarily by a bullet to the head in 2012, she has gone on not only to become an even more vocal advocate for equal (not to say any) education, but to challenge President Barack Obama face to face about the use of military drones in her country. It’s a straightforward account geared to those who aren’t ready to tackle longer, richer resources. Most of the cramped color photos, and all of the unhelpful pull quotes, serve to fill space more than anything else.

A portrait of a courageous and admirable young voice for change—but no substitute for the book that is its major source.