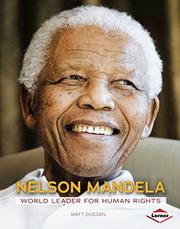 From the Gateway Biographies series

A standard-issue profile of the renowned activist—one of a spate launched by his death in December 2013.

Doeden opens with Mandela on trial for treason in 1964, closes with a quote from Barack Obama’s eulogy and in between covers the civil rights leader’s long career from childhood to final illness. Small news photos and boxed discussions of apartheid and Steve Biko’s brief life accompany a narrative that reads like a term paper—though, looking at the paltry lists of notes and sources at the end, an inadequately documented one. Along with plenty of similar bio-trivia, readers will find out that Mandela moved from village schools in Qunu and Mqhekezweni to Clarkebury Boarding Institute, Healdtown and the University of Fort Hare before getting a correspondence-course law degree from the University of South Africa…but not why any of that is worth knowing or what light it sheds on his character, achievements and historical significance. Yona Zeldis McDonough’s Peaceful Protest (illustrated by Malcah Zeldis, 2002) or Kadir Nelson’s terse but masterful Nelson Mandela (2013) supply clearer, more cogent tributes.