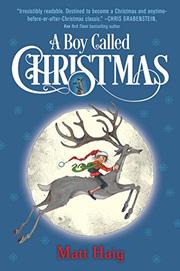 Young Nikolas has a grand adventure while discovering his magical destiny as Father Christmas.

Nikolas is a sweet, 12-year-old white boy who leads a hard-knock life in the woods of Finland. His mother has died, and his father, Joel is an impoverished woodcutter. Desperate for money, Joel joins a group of men on a quest to prove the existence of elves, leaving Nikolas with his ill-tempered aunt, Carlotta. Nikolas runs away to find his father, but trudging months through the woods, he faces starvation, freezing, and hopelessness. Then he comes across a reindeer with an arrow stuck in his leg. Nikolas helps him and names him Blitzen, and they continue their journey to the elf village together. Unfortunately, once located, the elves do not offer a warm welcome but instead lock Nikolas in the tower. It’s there that Nikolas discovers, with the help of a drimwick, or hope spell, that he’s become more than just the simple boy he used to be. With remarkable descriptions (“His eyebrows were sliding apart like caterpillars falling out of love”) and a bit of mischief (Blitzen likes to wee on the heads of humans as he flies over), this hits both ends of the audience’s sophistication range and has great promise as a read-aloud. The clever story is powdered with puckish illustrations and reminds humans and elves alike that goodness and kindness are a kind of magic.

Like stockings hung by the fire, this spellbinding opus may well become a yuletide tradition.