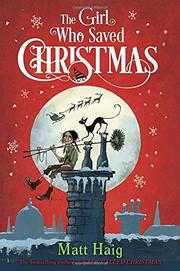 THE GIRL WHO SAVED CHRISTMAS

This companion to A Boy Called Christmas (2016) is written in the same jolly tone and similarly decorated with waggish illustrations. Eight-year-old Amelia, who once brimmed with hope, was the very first child to receive a present from Father Christmas. But because trolls destroyed the sleigh, the only thing Amelia received last Christmas was to be tossed into a workhouse run by the odious Mr. Creeper. Now starved and worked relentlessly, Amelia has run out of hope, the essential fuel for the magic of Christmas, and consequently Father Christmas can hardly get the sleigh off the ground or stop time long enough to get presents delivered to all the children of the world. It becomes Father Christmas’ mission to find Amelia amid the peculiar streets and humanity of London. This tale is classically atmospheric; in fact, Charles Dickens himself makes some very important appearances. With an abundance of chortleworthy silliness (“Vixen bit Comet’s ear for sniffing her bottom”), supreme wisdom is bestowed: trolls aren’t very smart, but they don’t hate Father Christmas; Flying Story Pixies will do anything for wonderful new words; and most importantly, hope is born in the simple act of kindness. The human cast appears to be an all-white one.

With a little bit of naughty and a lot of nice, this Christmastime yarn is a veritable sugarplum.