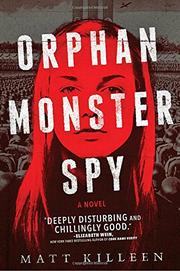 A half-Jewish girl in Nazi Germany passes up a chance to escape in favor of the opportunity to screw with Nazis.

Sarah’s mother is shot as they try to flee, but a stranger in a dark warehouse gives the bleeding, grieving Sarah good advice to avoid detection. When Sarah later sees the stranger being harassed by the police, she interrupts her own planned escape to save him. Her new ally, she learns, is a British spy, and she defies his attempt to help her to freedom. Wouldn’t it be better to stay and hurt the Nazis? Fifteen-year-old blonde Sarah looks not only Aryan but young: she’s as small as an 11-year-old. Home-schooled by her mother (who was an actress before the Nuremberg Laws left her unemployed, alcoholic, and abusive), Sarah’s skilled at playacting and languages. She’s even turned her gymnastics experience into a kind of parkour to avoid anti-Semitic violence and steal food. In other words, she’s a perfect spy. Disguised as the 13-year-old daughter of a Nazi official, she infiltrates an elite school. If she can befriend one of her classmates, the daughter of a nuclear physicist, she might save the Allies. Killeen’s thriller is cold, exciting, and well-paced, but its major plot point—the physicist’s independent development of a superweapon—is so James Bond it undercuts the real-world horror that was the Holocaust. Sarah’s coming-of-age and psychological crisis are so well-drawn, however, that the plot’s flaws are forgivable.

A powerful, bleak, and penetrating portrait of an isolated young woman excelling in unimaginable danger