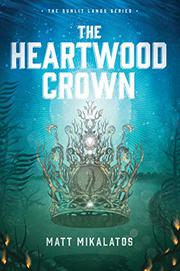 From the Sunlit Lands series, volume 2

A dying girl, a failing world.

In this sequel to The Crescent Stone (2018), Madeline has returned to Earth still sick after rejecting the Elenil magic that allowed her to breathe freely at the cost of another. However, the crumbling magic system and unfolding secrets draw her back to the Sunlit Lands. Though Madeline is key, the story focuses on Shula Bishara, a Syrian refugee and ex-Elenil soldier; Jason Wu, the boy who pledged never to lie; and Darius Walker, Madeline’s ex and a Black Skull. The main plot points are blatantly laid out—no need to guess who will die at the end—but it is the journey and the choices made along the way that make this story shine. Despite prophecies, fire powers, a magical sword, and the silliness of a kitten-sized rhinoceros, these are sympathetic teens who struggle to make hard decisions in lives complicated by revenge, guilt, and sacrifice. More so than in the previous book, this volume focuses on parallels with current race relations and considers modern history and literature from the viewpoint of the disenfranchised and oppressed. Madeline is white, and there is ethnic diversity in the rest of the cast. Navigating this world and its characters may be daunting for those seeking a quick read, but others will find much to delve into and unpack.

A fantasy for thoughtful readers.