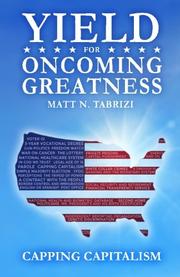 Tabrizi, in his debut nonfiction work, offers high-level proposals for how to improve the country.

Early on, the author, an Iranian immigrant, describes an experience he had after 9/11. When an annoyed flight attendant coldly told him that she could get him removed from the plane, he realized that she had the power to ruin his life: “This is a state of suspicion and paranoia rather than a state of democracy and freedom,” he thought. The book loses this personal tone, however, when the author begins to share his broad proposals to fix the nation’s ills. His first suggestion is a “Financial Transparency Service,” staffed by volunteers, which would produce a website with graphic reports of the profit and loss statements and balance sheets of every nonprofit and government contractor in the country. (Here, as elsewhere, he leaves unanswered questions, such as what would happen if the service couldn’t find enough qualified volunteers.) Next, he says, he would start a “Freedom Watch” group, staffed by peer-selected, unpaid experts, including CPAs, economists, scientists, and physicians. Freedom Watch subgroups would assign red, yellow, or green flags to various broad topics, such as global warming or stem cell research, to signal problems that need resolution. Any candidates for office, Tabrizi says, would have to state his or her opinion on every Freedom Watch issue, in the form of a “yes,” “no,” or “pass.” This is a big idea, yet the author covers it in less than three pages. Indeed, an overall lack of detail and an absence of practical descriptions of how ideas would work are the book’s main shortcomings. The author’s other ideas include limiting advertisements for certain items, including prescription drugs; requiring voter identification; insisting that all presidential candidates must be third-generation Americans; requiring Spanish as a second language; ending high school in 10th grade; and legalizing soft drugs and prostitution. Some of these notions do have widespread appeal, and Tabrizi helpfully points readers to organizations that are already doing advocacy work on such issues as popular-vote presidential election. However, he doesn’t anticipate or address skeptics’ concerns—including how his ideas might pass the U.S. Congress.

An earnest book with idealistic intent but its proposals lack the detail they need to be widely embraced.