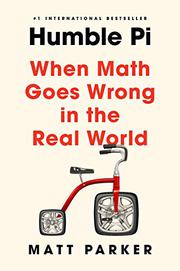 When Math Goes Wrong in the Real World

A pleasant exploration of our deeply held incompetence at mathematics.

Comedian and YouTube performer Parker (Things To Make and Do in the Fourth Dimension: A Mathematician's Journey Through Narcissistic Numbers, Optimal Dating Algorithms, at Least Two Kinds of Infinity, and More, 2014), who hosts a show on the Science Channel called Outrageous Acts of Science, claims bluntly that humans are stupid at dealing with numbers. “We were not born with any kind of ability to understand fractions, negative numbers, or the many other strange concepts developed by mathematics,” he writes, “but, over time, your brain can slowly learn how to deal with them.” Ironically, it is engineering and computer glitches, not pure math, that make up much of the book. Buildings and bridges collapse because someone gets the numbers wrong. A squadron of advanced jets crossing the Pacific suddenly lost their electronics because their navigation computer program, which must keep track of time, couldn’t deal with crossing the International Date Line. They followed an older plane nearby to a safe landing. A corporation, searching for an employee named Jack Null, could never find him because “null” to a computer means “no data.” People named Blank, Sample, and Test also cause trouble. A number divided by a really tiny number becomes very large. The result of dividing by zero is meaningless; no proper computer will deal with it. Humans yearn to predict the unpredictable; the author shows how a truly random event (a lottery draw, a coin flip) has no influence on the following event. No matter how many times heads appears, the chance of tails remains 50-50. The only way to increase your chance of winning the lottery is to buy more tickets. If black comes up four, five, or 10 times in a row on the roulette wheel, gamblers rush to bet on red because it is “due”—but it isn’t. Nonsense, blunders, and delusions make for good reading, so Parker’s relentless litany will have a wide appeal.