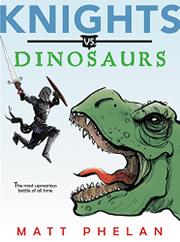 Who needs dragons when there are Terrible Lizards to be fought?

Having recklessly boasted to King Arthur and the court that he’d slain 40 dragons, Sir Erec can hardly refuse when Merlin offers him more challenging foes…and so it is that in no time (so to speak), Erec, with bookish Sir Hector, the silent and enigmatic Black Knight, and blustering Sir Bors with his thin but doughty squire, Mel, in tow, are hewing away at fearsome creatures sporting natural armor and weapons every bit as effective as knightly ones. Happily, while all the glorious mashing and bashing leads to awesome feats aplenty—who would suspect that a ravening T. Rex could be decked by a well-placed punch to the jaw?—when the dust settles neither bloodshed nor permanent injury has been dealt to either side. Better yet, not even the stunning revelation that two of the Three Stooges–style bumblers aren’t what they seem (“Anyone else here a girl?”) keeps the questers from developing into a well-knit team capable of repeatedly saving one another’s bacon. Phelan endows the all-white human cast with finely drawn, eloquently expressive faces but otherwise works in a loose, movement-filled style, pitting his clanking crew against an almost nonstop onslaught of toothy monsters in a monochrome mix of single scenes and occasional wordless sequential panels.

Epic—in plot, not length—and as wise and wonderful as Gerald Morris’ Arthurian exploits.