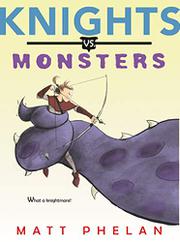 Fresh from the exploits chronicled in Knights Vs. Dinosaurs (2018) and on the lookout for a “proper adventure,” Sirs Erec, Bors, and Hector, the fearsome Black Knight Magdalena, and former squire in disguise Melancholy “Mel” Postlethwaite fetch up in the bleak Orkney Isles, where sorcerous Queen Morgause plans to do them in as part of a larger scheme to dethrone King Arthur. Along with several of her raffish offspring—including creepy young Mordred, who temporarily turns Sir Hector into a two-headed “bi-clops”—the doughty Band of the Terrible Lizards faces burgeoning hordes of monsters summoned out of the fog by the evil queen. Though chock-full of briskly paced action and glints of humor, this is a darker tale than its predecessor, colored more by its harsh setting and undercurrents of treachery than all the knightly feats and values on display. Phelan’s many panels and full-page drawings have an ashy, smudged look that adds to the gloomy atmosphere, and as someone who plainly has a few heavy secrets in her past, Magdalena projects a cold, austere remoteness that dims the rest of the company’s (rarer than previously) comical banter and bumbling. Still, a pleaser for fans of Gerald Morris’ Arthurian delights.

Young heroes both male and female rout many excellent monsters—what’s not to like? (Graphic/fantasy hybrid. 9-11)