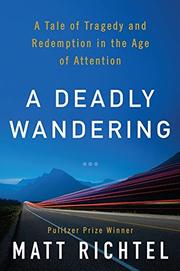 A Tale of Tragedy and Redemption in the Age of Attention

A novelist and Pulitzer Prize–winning New York Times reporter explores with nearly Javert-ian persistence one of the early cases of traffic fatalities caused by texting while driving.

On Sept. 22, 2006, college student Reggie Shaw, texting in his truck, veered into the oncoming lane on a narrow highway near Logan, Utah, and struck a car, knocking it into an approaching truck. Both men inside that car were rocket scientists with families, and both died. Richtel (Devil’s Plaything, 2011, etc.) begins his account with an MRI of Shaw’s brain (he returns to this scene near the end), then reports the crash in detail, following the story to its most recent legal and emotional conclusions (insofar as there can be conclusions). He alternates his focus throughout: from Shaw and his family, to the victims’ families, to the police and legal system, to the legislators considering texting laws, to the latest scientific research on how much we can possibly attend to in our incredibly distracting world (not nearly as much as we think). Readers will be alarmed to discover what science has learned about the dangers drivers create when they text or talk on the phone. The vast majority of us are just not capable of doing so safely. Richtel excels at bringing to life his cast of sundry characters. (Virtually everyone agreed to interviews.) Readers get to know Shaw’s parents, the widows, the daughters of the victims, the attorneys on both sides, a judge who keeps Les Misérables near at hand (and required Shaw to read it), a victims rights advocate, scientists and, of course, Shaw himself, who emerges as a modest young man (a devout Mormon), a young man who’d never before been in trouble, a young man who, we eventually realize, could be any one of us.