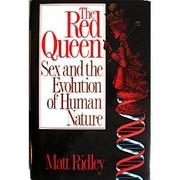 Sex and the Evolution of Human Nature

A former editor of The Economist asks how sexual selection has molded human nature.

The title here alludes to a scene in Lewis Carroll in which Alice and the Red Queen run as fast as possible to remain in the same place. Ridley looks first at current thinking on why sexual reproduction exists at all, when many organisms manage quite well without it. The answer has to do with disease: a species must rebuild its defenses from one generation to the next merely to keep from falling behind in the race against opportunistic viruses. Sex, by allowing a new shuffle of the genetic material with each generation, improves the chance of survival. But the predators also improve with each generation, so the race (vide Lewis Carroll) is never over. Turning to animals, Ridley describes mating patterns with an eye as to whether mates are selected for health and vigor, or for esthetics. He concludes that both play a role: neither sickly fashion-plates nor healthy wallflowers will pass on their genes as often as those who combine both beauty and health. Given the contrast between a brief sexual act and long years of child- rearing, aggressive males will tend to have more children, while nurturing women will have healthier ones. Those who select mates with these qualities will transmit them to ensuing generations, along with other qualities affecting offspring survival.

Ridley contends—not a popular thesis in recent decades—that such genetic programming is far more central to human nature than social conditioning. Extensively researched, clearly written: one of the best introductions to its fascinating and controversial subject.