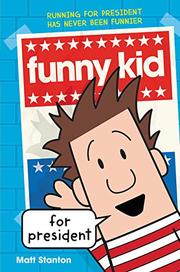 From the Funny Kid series, volume 1

Eleven-year-old Max Walburt is not the most popular kid at Redhill Middle School, but he is Mr. Armstrong’s favorite person to blame when things go wrong. When a dollop of poop appears in the class storeroom and an incensed Mr. Armstrong blames Max without evidence, Max plots revenge with his fat, dim buddy, Hugo. The plot’s exposed by too-short (and very evil) Abby Purcell, and the ensuing chaos causes principal Mrs. Sniggles to order a class election. Max throws his hat in the ring, but something’s up. Handsome (and lactose-intolerant) opponent Kevin experiences a vomit event in the library, and he’s out. Tall Ryan has a disastrous gym class, and he’s out. Can Max, using his sense of humor, join with unlikely allies and discover what’s going on (while escaping a psycho-stalker duck)? Stanton kicks off a series of illustrated misadventures with a more-than-slightly scatological mystery. The kids are not a lot more than their central quirks, but the straightforward if mean-spirited story does have moments of good comic timing. The poop-centered mystery won’t be to everyone’s taste, but Wimpy Kid fans may seek the sequel. Max, Hugo, and the teachers are white; Kevin and Abby have brown skin, and Ryan may be Asian.